New Delhi: Bollywood actress Rhea Chakraborty For the past few weeks, the city has been discussing her alleged involvement bigg boss 15. Many fans have speculated about Salman Khan’s entry in the controversial show. However, there was no confirmation yet.

Rhea finally takes it upon herself to clear the air and put an end to the rumours. On Saturday night (October 2), she took to Instagram and denied participating in the show in her story. She said that she will not be seen in Bigg Boss 15.

He wrote, “I believe there are rumors of me being a part of the TV show Bigg Boss, this is just to clarify that there is no truth to these rumours. I am not a part of Bigg Boss.” 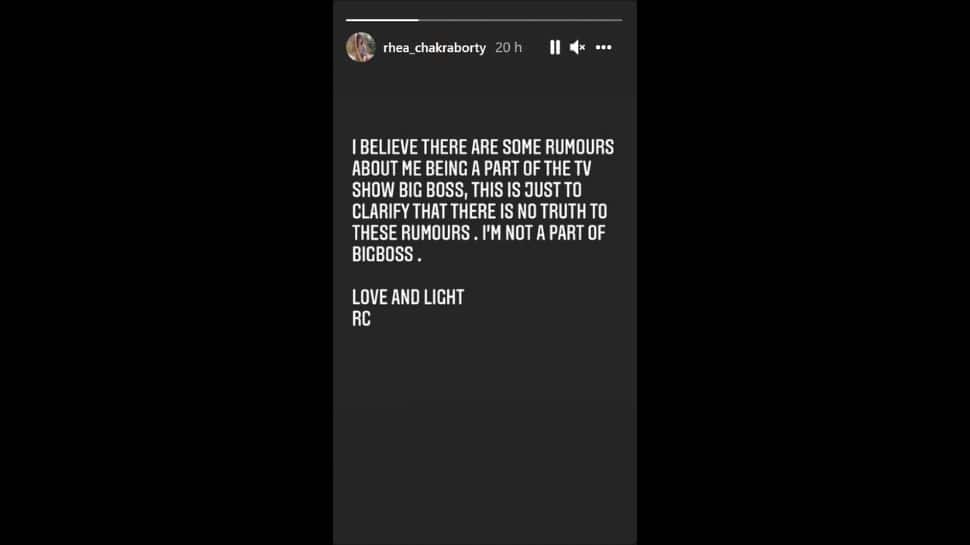 On the work front, Rhea Chakraborty was last seen in Amitabh Bachchan and Emraan Hashmi starrer ‘Chehre’, which released a while back. Directed by Rumi Jaffrey, ‘Chehre’ also stars Emraan Hashmi, who plays a business tycoon with a complicated past.

On the other hand, Bigg Boss 15 Grand Premiere Part 1 aired on Colors TV on Saturday night, with Salman Khan introducing the audience to the wild contestants on the show. The second part of the promo will air on Sunday at 9:30 pm on Colors TV and Voot

Blaze damages historic bridge across the Tiber River in Rome

Meet the woman who earned Rs 18 lakh by selling her feet online!

On Rishi Kapoor’s birth anniversary, daughter Riddhima Kapoor remembers him as the ‘brightest star in heaven’!

Criminal charges against Alec Baldwin not ruled out: US official on prop gun incident
15 mins ago

Criminal charges against Alec Baldwin not ruled out: US official on prop gun incident

More than 600,000 US homes suffer blackout amid powerful coastal storm
37 mins ago

In historic move, US issues first passport with ‘X’ gender
43 mins ago

When a Dinosaur Spoke to Humans: The United Nations Advertisement Against Extinction
45 mins ago

Oman approves Covaxin shots for travel without quarantine
55 mins ago