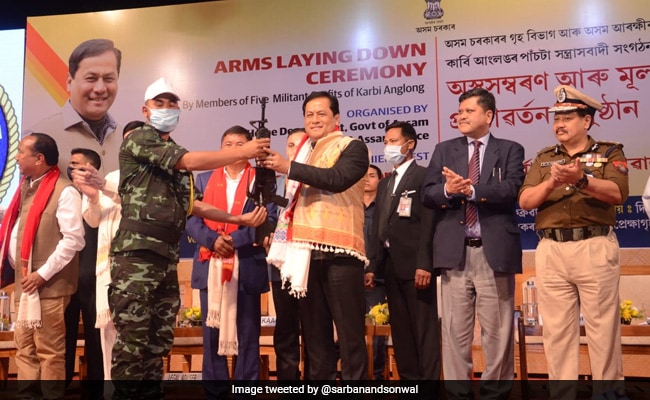 The terrorists laid down arms before Chief Minister Sarbananda Sonowal.

The dreaded militant Igti Katar belongs to Songbijit and 1,039 other five organizations, who laid down their weapons to return to the mainstream before Chief Minister Sarbananda Sonowal on Tuesday.

Songbijit is the head of PDCK. He was previously the commander-in-chief of the banned National Democratic Front of Boroland.

He was involved in several incidents of massacres, mostly from minority communities, in the erstwhile Bodoland Territorial Area Districts. Songbjit was sidelined following an operation suspended by the Ranjan Daimary faction of NDFB. Later he formed PDCK in Karbi Anglong district.

Welcoming the mainstream of 1,040 surrenders from Karbi Anglong and West Karbi Anglong districts, Mr. Sonowal said that his government was working to make Assam a terror-free state.

“We are giving all possible help to the youth coming back in the society. We are also providing logistic support along with financial help. We will continue to do so,” he said.

He said that a formal peace deal would be signed with rebel groups within the next two days.

Heartfelt farewell to Sniffer Dog in Nashik after 11 years of service. The clock

Best from science journals: memory without a brain
36 mins ago

Best from science journals: memory without a brain

After the flash flood, an alternate bailey bridge over the Rishiganga in Uttarakhand opens.
39 mins ago

After the flash flood, an alternate bailey bridge over the Rishiganga in Uttarakhand opens.

Laborer dies after a dispute over food in Mumbai