The BJP on Friday took a dig at Rahul Gandhi for locking his account on Twitter for violating company policy and Indian laws – by posting pictures that depict him as a nine-year-old Dalit girl allegedly raped and murdered in Delhi. Show with family. 1 August.

“Now, Gandhi can’t rest after tweeting a family picture of a rape and murder victim’s argument behind the ‘freedom of expression’ argument,” Tejashwi Surya was quoted as saying by news agency PTI.

“The only place he was active is on Twitter. Unfortunately, even Twitter has shown him the door,” he said.

The Bengaluru MP also mocked Mr Gandhi and the Congress for attacking the government over the new IT rules – a set of laws that the BJP has insisted “will empower social media users” and government directives on take-downs. Sites like Twitter will be required to follow. “offensive” content.

The IT rule – which Congress and other critics say violates the right to privacy and freedom of expression – has sparked a major controversy, with the government accusing Twitter of dragging its heels on compliance and voiding legal protections as a result. have put.

like a part Congress and Rahul Gandhi counterattack against closure of accounts (and hundreds of its leaders), he accused Twitter of “selective” action against the opposition party, and the government was accused of intimidating the company.

Earlier today Mr. Gandhi released a YouTube video in which he Twitter slammed for “interfering in our political process” And attacking the democratic structure of the country.

Congress has been pointing out time and again that the photographs of the girl’s parents – which sparked the fire Complaint to National Commission for Protection of Child Rights, or NCPCR – was also tweeted by two other ‘verified’ accounts, one of which is related to BJP MP Anju Bala.

The second was the government’s commission for the Scheduled Castes.

Congress informed last week that both the accounts are operational.

Yesterday also the party pointed out that what they feel is double standards; The party’s youth wing chief BV Srinivas said, Amit Malviya of BJP shared a post It exposes the identity of the Dalit woman from Hathras in UP, who was raped and murdered in September last year. 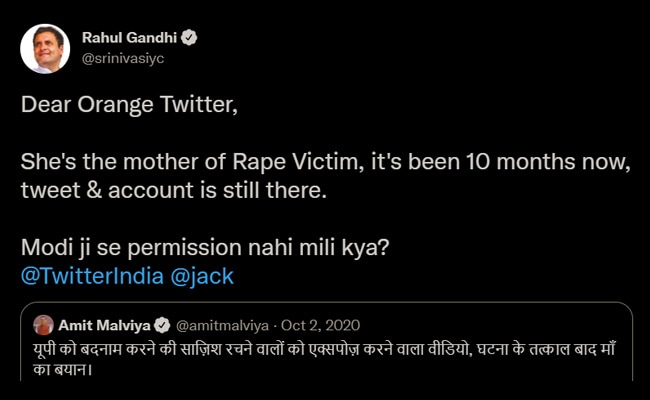 No action has been taken so far against Mr. Malviya’s account or post, which remains accessible and violates the same laws that Mr. Gandhi is alleged to have violated.

In terms of the action against Mr Gandhi and the Congress handle, Twitter said that its rules were “judiciously and fairly applied to all”, and that it “took proactive action on the several hundred tweets that have followed our rules”. posted an infringing image”.

The company has not commented on this Congress claims inaction against other handles.

With input from PTI

Xiaomi is apparently dropping its ‘Mi’ branding, starting with the Xiaomi Mix 4

Google discontinues Pixel 4A 5G, Pixel 5 ahead of Pixel 6 launch

People with chronic conditions, people of Indian background more vulnerable to COVID even after vaccine: UK study
16 mins ago

Will the ‘humiliated’ Captain Amarinder Singh quit the Congress and join the BJP?
39 mins ago

Will the ‘humiliated’ Captain Amarinder Singh quit the Congress and join the BJP?

Putin’s party will retain majority in parliament after election

Taliban changed the symbol of Women’s Ministry, stir
51 mins ago