This year, foreign funds have invested $ 7.2 billion in the country’s equities.

The Reserve Bank of India is helping fuel a world-beating stock market rally with record-low interest rates and heavy injections of liquidity – even as inflation threatens to break out of its target range. Investors are betting the easy money won’t be over anytime soon, with central bank governor Shaktikanta Das keeping a lid on discontent as the economy bounces back from its pandemic.

Foreign funds have infused $7.2 billion into the country’s equities this year and net inflows are expected to continue. The market for initial public offerings is in turmoil, fueled by a frenzy of interest in startups, and India is poised to attract investors who are scared of China’s regulatory action.

Retail traders as well as domestic institutions are making deposits, contributing a record $3 billion to equity funds last month. While India has suffered a staggering loss from the coronavirus, lakhs of individual investors are rushing into stock trading with savings during the lockdown.

“The market is full of liquidity, which will absorb the downside, if any,” said Ashish Chaturmohata, director of research, Sanctum Wealth Management Pvt Ltd. in Mumbai. “Sufficient money has been put in to support the economy and many sectors are seeing continued growth with great future prospects.” 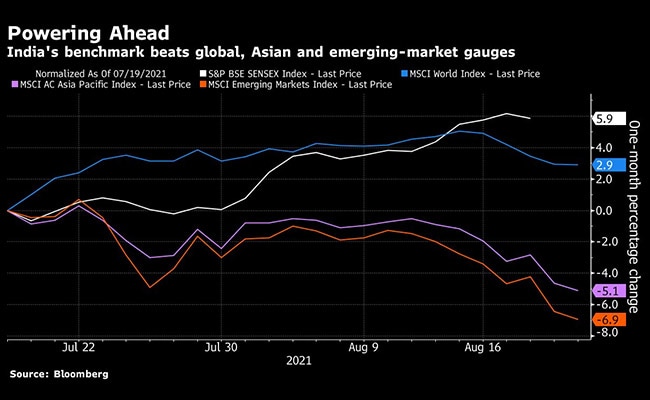 The benchmark S&P BSE Sensex has more than doubled from its Covid-induced nadir in March last year, accelerating gains this month as it continues to extend record highs. The rally has made it the world’s best performer in the primary indices of countries with equity market capitalizations of at least $3 trillion in August.

The Sensex was down 0.5% on Friday amid broad selling in Asia stocks. Still, it outperformed the MSCI Asia Pacific Index, which fell 1%.

While an army of investors is betting on more gains for India, there is no shortage of risks either.

At the top of the list is inflation, which broke above the RBI’s 2%-6% target range in May and June before slipping below the top of the band in July.

Governor Das sees the recent spike as “transient”, but others disagree. Companies ranging from the Indian arm of Unilever plc to Tata Motors Ltd are struggling to absorb rising raw material costs and one of the RBI’s own rate setters said “reservations” about continuing the accommodative policy stance. “The voice has been raised. 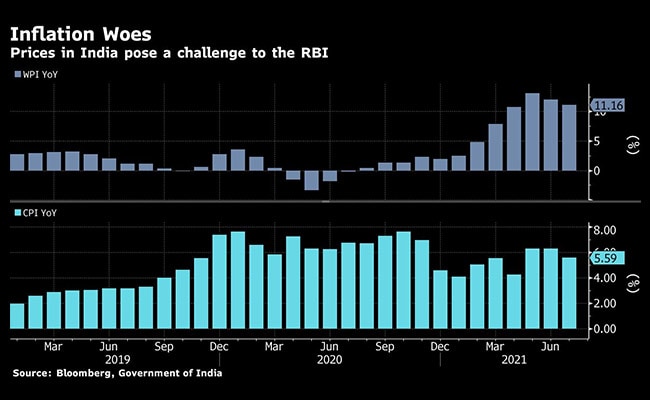 The central bank is also alert to the dangers of a possible bubble in the market. The RBI, in its annual report earlier this year, warned that the injection of cash to support the economic recovery could lead to unexpected inflationary asset prices.

The Sensex is now trading at 22.6 times its 12-month estimated earnings, well above its five-year average of 18.9. In comparison, the MSCI Emerging Markets Index is trading at a multiple of 12.3.

It is then expected that the Federal Reserve will tighten its monetary policy as soon as possible, triggering a rapid outflow of funds from emerging markets, including India.

And casting a shadow on everything is a virus.

After more than 430,000 deaths and 32 million infections, India’s vaccination rate is on the rise, allowing more economy to open up and shore up market sentiment. But as the first country to be ravaged by the delta version of Covid-19, India has shown how quickly the outlook can change.

For now though, Das has said the central bank is in “whatever mode it takes” to support the economy.

The RBI’s key repurchase rate is at an all-time low of 4%, the government remains committed to higher spending and additional liquidity in the banking system touched a record $8.6 trillion ($116 billion) this month, data from Bloomberg Economics shows.

“We believe the market index levels are sustainable,” said Prateek Agarwal, chief investment officer, ASK Investment Managers Ltd in Mumbai. “This is a year in which the global economy is turning and the policy environment is still favorable for equities.”

IIFL Finance to raise Rs 1,000 cr through secured bonds: All you need to know

We love India, see it as a great friend: Israeli PM Naftali Bennett after meeting Jaishankar
22 mins ago

World News Round-up: 5 Overnight Events from Around the World
40 mins ago