New Delhi: Actress Kangana Ranaut has shared an Instagram post about Jackie Chan, where she reminded her fans how the legendary actor apologized when his son came to know about the drugs scam. Well, this could be an indirect comment for Shah Rukh Khan, whose son Aryan Khan is also in jail for his involvement in a drugs case.

On his Instagram story on Sunday, the ‘Panga’ actor shared a trivia about Jackie Chan and reminded fans how the iconic star publicly apologized after his son Jesse was caught in a drugs scandal in 2014 Was.

He said, “I am ashamed of my son’s action, it is my failure and I will not intervene to protect him” and after that his son was jailed for six months. 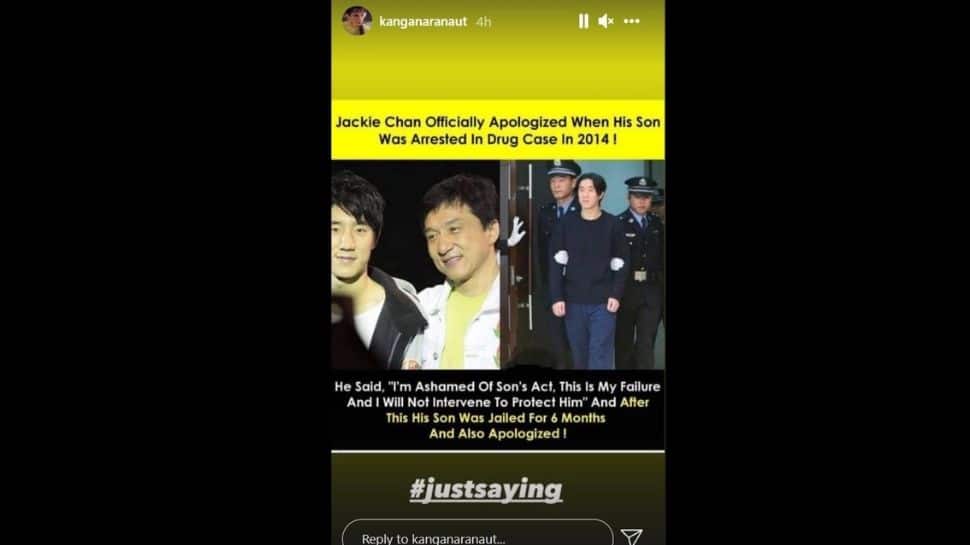 In 2014, Jaycee was arrested and jailed for possession and distribution of marijuana and for accommodating drug users in his apartment in Beijing. Chan was sentenced to six months in state prison and served his entire sentence behind bars.

The post comes days after the ‘Queen’ star commented on the arrest of superstar Shah Rukh Khan’s son Aryan by the Narcotics Control Bureau (NCB) in an alleged drug case.

He had reprimanded those who came forward to defend Aryan Khan.

“Now all mafia pappu is coming to Aryan Khan’s rescue…we make mistakes but we should not glorify him…I believe it will give him perspective and also make him realize the consequences of his actions.. .hope it can grow him and make him better and bigger ,” she wrote in an Instagram Story post at the time. 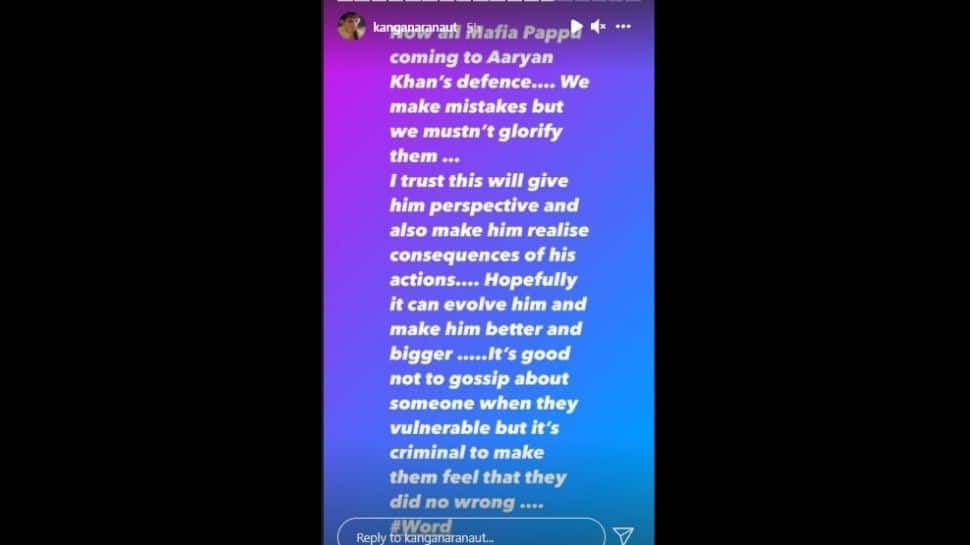 Many fans and stars from the film industry, including actors Hrithik Roshan, Raveena Tandon, Shekhar Suman and Vishal Dadlani, have extended their support to Shah Rukh Khan and his family in person and on social media.

Superstars Salman Khan and Karan Johar were also seen visiting Shah Rukh Khan’s Mannat residence after the controversy broke out in the media.

An NCB team busted an alleged drugs party on board the Cordelia cruise ship, which was on its way to Goa in the middle of the sea on the night of October 2.

Eight people, including Aryan, Arbaaz Seth Merchant, Munmun Dhamecha, Vikrant Chhokar, Ismeet Singh, Nupur Sarika, Gomit Chopra and Mohk Jaswal, were produced in Mumbai’s Esplanade Court on October 4, which sent them to NCB custody till October 7. . In relation to the drug seizure on the cruise ship on October 3.

According to the NCB, Aryan was charged with sections 8C, 20B, 27 (punishment for the use of any narcotic drug or psychotropic substance) and 35 (presuming to be of unsound mental state) of the Narcotic Drugs and Psychotropic Substances Act (NDPS) among others. A case has been registered under Work).

Aryan and seven others were sent to judicial custody for 14 days by a magistrate court in Mumbai on Thursday. On Friday, a Mumbai court rejected his bail plea.

Travel to Jaipur? You Can Bring These 5 Souvenirs To Your Family And Friends!