New Delhi: ‘Thalaivi’ is getting rave reviews and as expected Bollywood queen Kangana Ranaut is being praised for her solid-packed performance in the film as former Tamil Nadu Chief Minister J Jayalalithaa. Kangana, who has got her acting iron in many films, is spreading the brightest in the film this time too. Riding on the highs of success, the actress on Tuesday announced her next venture, ‘The Avatar – Sita’, leaving her fans in awe.

Looks like Kangana has got this much-talked-about project from her contemporary Kareena Kapoor Khan.

This epic play is written by ‘Bahubali’ fame KV Vijayendra Prasad. The film will be directed by Alaukik Desai and is supported by SS Studio’s producer Saloni Sharma. Sharma said that Ranaut is a suitable choice to play the titular character.

“As a woman, I couldn’t be happier to welcome Ms. Kangana Ranaut to our VFX magnum opus, ‘The Avatar Sita’. Kangana embodies the spirit and essence of the Indian woman – fearless, challenging and courageous.. . It is time we stepped out to celebrate equality in every way possible,” the producer said in a statement.

This is reportedly the same project for which Kareena had reportedly asked for a whopping fee of Rs 12 crore. However, looks like Kareena has lost the project and Kangana will be seen playing the lead role in the film.

The four-time National Award winner took to social media to announce the film, also shared a childhood picture in which she is seen dressed up as Sita. The actor also shared an old picture from her school days, which reveals that this is not the first time she will be essaying the mythological character. She shared on her Instagram Stories, “I played Sita as a kid, when I was 12, when I was in the school play Ha Ha…Siyaramchandra Ki Jai.”

Here’s a look at Kangana Ranaut’s childhood picture from her school days: 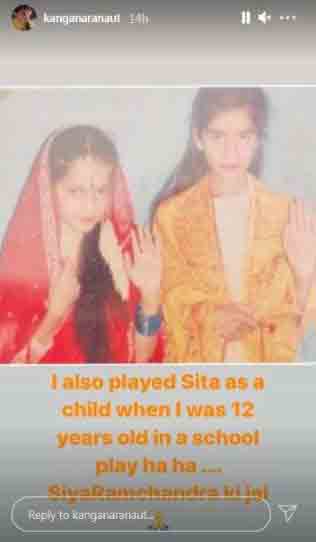 IPL 2021: Fans will return to the stadium in limited capacity for the rest of the season

IPL 2021, CSK vs MI Playing XI: No Bravo, Dhoni as floater, Thakur may be promoted
20 mins ago

IPL 2021, CSK vs MI Playing XI: No Bravo, Dhoni as floater, Thakur may be promoted

You are pregnant, you have to quit: Neha Dhupia reveals she was dropped from projects during second pregnancy!
34 mins ago

You are pregnant, you have to quit: Neha Dhupia reveals she was dropped from projects during second pregnancy!

UP Assembly Election 2022: Will Priyanka Gandhi be the CM face of Congress? Salman Khurshid replied
35 mins ago

UP Assembly Election 2022: Will Priyanka Gandhi be the CM face of Congress? Salman Khurshid replied

covid crisis is now garbage crisis too
45 mins ago

Australia made a ‘diplomatic mistake’ by canceling submarine deal: French envoy
46 mins ago