New DelhiProminent filmmaker Neelima Guna has rubbished the rumors about the actress Samantha Ruth Prabhu and Naga Chaitanya Divorce. Several rumors claiming that Samantha was involved in illegal affairs, abortion, surrogacy have been floating around since the two announced their divorce a week ago.

Neelima, who had previously worked with Samantha, has now come to her rescue amid controversial rumours.

In an interview with Hyderabad Times, she revealed that Samantha was actually planning to start a family with Naga Chaitanya.

Neelima said, “When my father, director Gunasekhar Garu approached Samantha for Shakuntalam last year, he liked the story and was excited. But, she told us that the shoot should be completed by July or August as she Was planning to start a family with Naga. Chaitanya.”

She revealed that Samantha had a desire to become a mother and had earlier asked her to change the shooting schedule as she did not want the film to hinder her plans to start a family.

“She wanted to be a mom; she told us it was her priority. Period films take time and she was really apprehensive to say yes. But we assured that because of the extensive pre-production, we had very little time.” She was overjoyed to hear this and boarded the ship. She wanted to plan a family, take a break and look after her kids. We didn’t take a break from the schedule because we were her Wanted to accommodate the request,” revealed Neelima.

Earlier, Samantha took to her Instagram stories hit back against malicious rumors against him. He described how divorce is “an extremely painful process”, but the “constant personal attacks” have made it even more difficult. 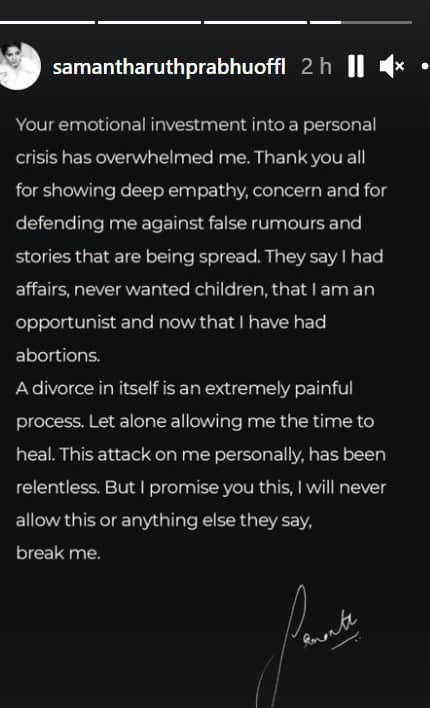 Announcing the separation, Chayasam (as he was fondly called by fans) wrote in a joint statement shared on social media: To all our well wishers. After much deliberation and deliberation, Chai and I have decided to separate as husband and wife to continue on our way. We are fortunate that over a decade of friendship was the core of our relationship, which we believe will always be a special bond between us.. We request our fans, well wishers and media to support us in this difficult time and give us the necessary privacy to move forward. Thanks for your support.

As for the unversed, ChaySam divorce rumors (as his fans call him) took ground after Sam removed Akkineni (his surname) from social media handles.

Congress CWC meeting on 16 October; Lakhimpur violence, elections on the agenda of the meeting

Exclusive: Divya Agarwal is the most fake contestant on Bigg Boss OTT, Urfi Javed said after her eviction

Britney Spears plans to break away from social media

When Mouni Roy mistakenly tagged Rajnath Singh, thank you for the birthday wishes

In my lifetime, I wanted to see Pakistan beat India in World Cup: Wasim Akram
23 mins ago

In my lifetime, I wanted to see Pakistan beat India in World Cup: Wasim Akram

Moderna says its low-dose covid shot is 6 to 11. works for the children of
25 mins ago

Moderna says its low-dose covid shot is 6 to 11. works for the children of

Announcement of new IPL teams, these are the franchises and owners
32 mins ago

Announcement of new IPL teams, these are the franchises and owners